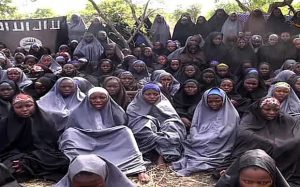 Mr Ali Maiyanga, a father of one among hundreds of schoolgirls abducted by Boko Haram about seven years ago in Borno State said he had spoken with his child in the custody of the Nigerian army.

It could be recalled that the dreaded terrorist group in 2014 stormed Government Girls Secondary School in Chibok, Chibok Local Government Area of the state and went away with 276 schoolgirls.

However, a report monitored by Naija News on Daily Trust on Thursday evening revealed that some of the girls have escaped from the Boko Haram den.

One among the girls, Halima Ali is said to have been married off to a Boko Haram commander after their kidnap.

A statement made available to newsmen by Emmanuel Ogebe of the US-Nigeria Law Group (USNLG) on Friday, revealed that Mr Maiyanga communicated his daughter who escaped with others on Thursday.

Naija News understands that the insurgent during the 2014 attack took away two daughters of Maiyanga.

However, the children are said to be with the army and anxiously waiting to identify with their parents.

“Today, a parent of still missing Chibok schoolgirls who USNLG supports informed us of the escape of additional schoolgirls six years and nine months after their abduction,” Ogebe revealed.

“We spoke and confirmed from Mr Ali Maiyanga moments ago that he in fact spoke with his daughter today who informed him that she along with others were rescued. Her sister who escaped four years ago and is on break was overjoyed at the news of her sibling’s escape,” the statement added.

In another news, banished Seriki Fulani of Igangan, Oyo State, Saliu Abdulkadri, has revealed the location of his family members following the burning of his house and properties by a mob in the Yoruba community.