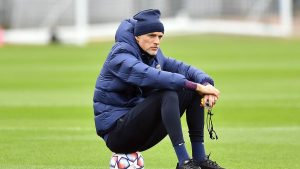 Chelsea owner, Roman Arkadyevich Abramovich and the club’s board has reportedly set a target for the new manager, Thomas Tuchel.

Just a few hours after his appointment as the new head coach at Stamford Bridge, Tuches has been mandated to qualify the Blues for the Champions League competition in his first six months.

Naija News understands that Tuchel penned a two year and a half deal with Chelsea and had just a few time to prove to the club how far he can stay. Chelsea with 29 points on the 10th position on the league table will on Wednesday, January 27 host Wolverhampton Wanderers to battle for another three-point.

In another news, Naija News reports that former teammates, Romelu Lukaku and Zlatan Ibrahimovic were involved in a heated clash in Tuesday’s Coppa Italia quarter-final clash between AC Milan and Inter Milan.

Tempers flared up just before the break after Lukaku took exception to a foul by Milan defender Alessio Romagnoli. Ibrahimovic stepped in and squared up to the furious Belgian.