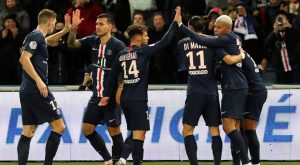 Brazilian playmaker, Neymar is back in action after recovering from a three-week injury.

PSG needs a win against Ole Gunnar Solskjaer’s men to qualify for the next round in the Champions League.

Former Manchester United player, Ander Herrera is set to play at Old Trafford for the first time since joining PSG on a free transfer in the summer of 2019.