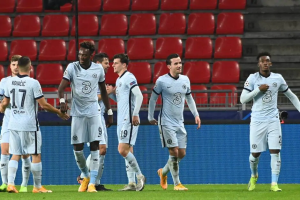 Thanks to their respective victories in Rennes (2-1) and Krasnodar (2-1), Chelsea and Sevilla FC have qualified for the knockout stages of the Champions League after four group matches.

Two of the sixteen tickets for the knockout stages of the Champions League have already been taken. Chelsea and Sevilla have validated their ticket for the rest of the European competition on Tuesday evening. They are the first teams to have acquired their qualification this season/

Chelsea won on the pitch at Stade Rennais. It was Hudson-Odoi who opened the scoring for the English before Guirassy equalized. Olivier Giroud offered the qualification to the Londoners in added time.

We left it late, but it's THREE points in the #UCL secured…