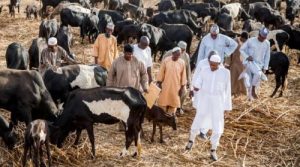 President Muhammadu Buhari has been called out by the Committee for the Defence of Human Rights for not attending to herdsmen issues in the country.

CDHR noted that Buhari being a cattle owner will not be fair in tackling the farmers-herdsmen crisis in the country, especially in the South-West.

The group stated these in a statement released through its National President, Dr Osagie Obayuwana after the National Executive Council meeting on Sunday.

It said, “CDHR agrees with the National Assembly that no other evidence is required in proof that the Nigerian state under President Muhammadu Buhari has not only failed woefully, but has shown through a combination of lacklustre performance characterised by incompetence and indifference, that the state under Buhari leadership cannot meet the fundamental purpose for which it was established – to uphold the security and welfare of the Nigerian people.”

“We affirm that the economic policies of the Buhari government by pauperising the masses on an ongoing basis directly and indirectly fuel insecurity, as they engender acts of desperation on the part of the unemployed and impoverished teeming population of youths, the pretences at insignificant palliatives notwithstanding.”

“President Buhari, being an owner of herds of cattle himself, obviously cannot rise above his entanglement in conflict of interest in the herdsmen/farmers’ faceoff. We are not surprised that after the rejection of his RUGA proposal, he has retreated into subterfuge in shadowy manoeuvres.”

“The herdsman needs to be mobilised to break away from the condemnation of living like an animal, with cows in bushes without any amenities. They don’t own the cows yet they have committed the entirety of their lives to tending cows, without being paid salaries.

“The herdsman must be made to recognise at this time, that the relationship between him and the owners of the cows, who live in comfort in faraway cities and towns, is an exploitative one; he works 24 hours a day, seven days a week without defined terms of service.

“This relationship is a carryover from the slave era. If cow owners want ranches, they should acquire the land through purchase.”

In a related development, gunmen suspected to be Fulani herdsmen have reportedly killed three farmers within the Ijugbere axis of Owo Local Government Area, Ondo State.

Confirming the incident in a text message to DailyPost, the Senior Special Assistant to Governor Rotimi Akeredolu on Agriculture, Akin Olotu, said the farmers were killed on Saturday evening.