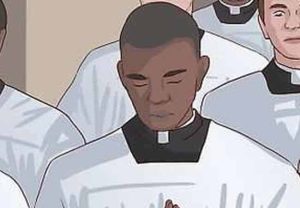 Naija News recalls that the Catholic Bishop was abducted on Sunday by the gunmen along the World Bank – Umuguma road in the evening.

The Gunmen who kidnapped the Bishop and his driver from their car later returned the vehicle to Assumpta Cathedral later that same day.

Reports emerged on Tuesday that the corpse of the prelate was allegedly found somewhere at the Ngor Okpala Local Government Area of the state.

But in a statement released to newsmen by his assistant secretary Rev. Fr. Nnaemeka Njezi, Archbishop Obinna described the report as false.

While describing the report as misleading, the Catholic bishop said there was no truth in the death rumour.

The statement read, “His grace, Most Rev Anthony Obinna, Archbishop of Owerri, hereby requests all Christ’s faithful and people of goodwill at large to disregard the purported news feed by one Useni Yusuf at AJ press on the killing of the auxiliary bishop of Owerri Archdiocese, Most Rev Moses Chikwe.

“This information is unconfirmed, misleading and does not come from the Catholic Archdiocese of Owerri.

“We continue to appeal that (we) all join the archbishop in prayers for the release of Bishop Chikwe and Mr Ndubuisi Robert, his driver.”