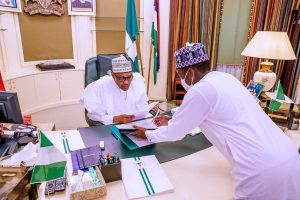 President Muhammadu Buhari’s nephew and domestic aide Sabiu Tunde Yusuf, has denied reports that he has been appointed an assistant director at the National Intelligence Agency (NIA).

He stated that he got to know about the news today when people began to congratulate him for a new job.

“How could I have been appointed into NIA, an institution that works undercover?”, he said.

Yusuf said people writing the story need to be educated about what the NIA does and what it stands for.

He accused forces within the NIA, who are not happy with the current Director-general, Abubakar Ahmed Rufai, of spreading the fake news.

Recall that Buhari allegedly inserted Yusuf into the Intelligence Agency despite lacking the requisite field and administrative experience to handle the rigours of the top job.

The source, who sought anonymity to discuss matters of national security told PeoplesGazette that Mr Yusuf has not been regular on the job because of his primary duties at the State House.

“It is whenever he desires that he will be at work,” one of our sources said. “The claim is now that he is on secondment at the Presidential Villa but his career work is now at the NIA.”

“The reason he was granted an office that should take at least 16 years of career buildup is that the president wanted him to be in charge of NIA before he leaves office,” another source said.

Presidency sources said Yusuf was sent to the NIA on the back of his “special skills” that Buhari said would “be useful” to the organisation.