Naija News has sighted fresh posters of the Peoples Democratic Party presidential candidate, Alhaji Atiku Abubakar in certain streets of Abuja which has already generated reactions from the presidency.

The fresh posters bear inscriptions that say: ‘The real and the right.’

The posters, which surfaced in the Federal Capital Territory yesterday, also bore ‘Pukka’ a Hindi word, which literally means ‘Genuine.

Many of the posters were seen in the Central Business District within the Abuja city centre. 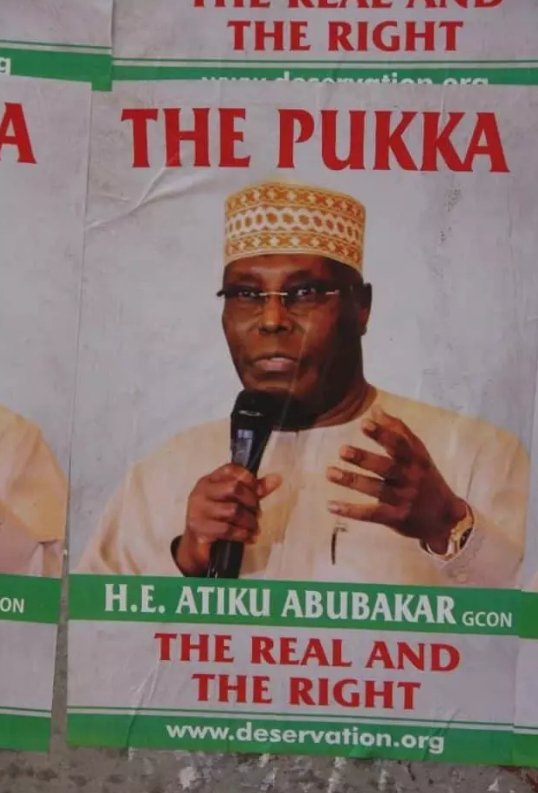 This online platform recalls that Lauretta Onochie, the presidential aide on social media, had taken to Twitter to reveal that she returned to Abuja on Tuesday to see Atiku’s fresh posters carrying treasonable inscriptions.

She said Atiku should be glad he is working free, rather than treading paths that may land him in jail for treason.

I just returned to Abuja and saw @atiku‘s photos with some weird inscriptions
For one who is lucky to be walking free, whatever he is planning, he shouldnt forget that we have a President in place
Nigerians will insist that treason be treated as treason. He should counsel himself

Recall Atiku contested for the office of the president against Muhammadu Buhari of the APC and other candidates in the 2019 presidential elections but lost out to the eventual winner, Buhari as officially declared by the nation’s electoral body, INEC.

He however rejected the results and promised to seek redress in court.