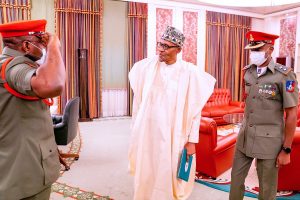 Naija News reports that Dodo takes over from Col. Mohammed Abubakar who has been with the President since the inception of his regime in 2015.

Dodo, who was the Academy Adjutant of the Nigerian Defence Academy, was appointed Buhari’s new ADC last month and has since been understudying Abubakar.

Abubakar is proceeding to Santiago, Chile for a five-month Strategic and Defence Course from March 8.

Abubakar, accompanied by his wife and daughter, formally handed over to the new ADC at a brief ceremony on Monday.

An ADC is one of the prominent security officials to the president.