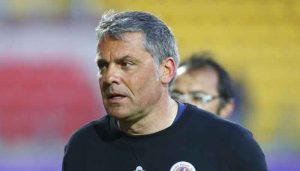 Former Ligue 1 player who played as a goalkeeper during his professional football career, Bruno Martini has been confirmed dead.

Naija News understands that the former French international died at the age of 58 after suffering a cardiac arrest for sometimes.

His death was confirmed in a statement released on Tuesday, October 20, by the Ligue. It was reported that Martini was hospitalized in the last week after he had suffered a cardiac attack at the training centre.

The statement reads; “Today, French football mourns one of the greatest goalkeepers in its history and one of Montpellier’s most loyal servants, on and off the pitch.

“He lives the image of a good man, always ready to help, and who never missed the opportunity to distil a kind word to each of his interlocutors,” the statement added.

Martini had spent his major career at Auxerre and Montpellier and also played 31 times for France. After a memorable 18-year career, he became a goalkeeping coach with the France squad that won the Euros in 2000, Naija News understands.

Welbeck returns to the English Premier League (EPL) after being relegated with Watford last season.