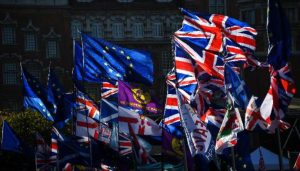 As the count down to the final exit of the United Kingdom from the European Union draws nearer, the leadership of the bloc has warned the British government that it will not be able to bring back the benefits of being an EU member with the new partnership deal.

European Council President Charles Michel, EU Parliament President David Sassoli and EU Commission President Ursula von der Leyen gave a speech on the future of Europe in Brussels, Belgium.
Saying; “Without being a member, you cannot retain the benefits of membership. Without the free movement of people, there can be no free movement of capital, goods, and services”.

Britain will no longer be an EU member state from Saturday, but it will enter a transition period until the end of December that is meant to give citizens and businesses time to adapt while an agreement is hammered out on the shape of the future relationship.

Although the aim is to achieve a “zero tariff, zero quota” trade deal, the EU says that it would also require “zero dumpings”.

It will insist that Britain remain aligned on standards and regulations to guarantee fair competition, but London has already indicated it will not be “a rule-taker”

Naija News However understands that the European Parliament  has voted in favour of approving the Brexit deal, 621 vs 49, allowing Brexit to take place today