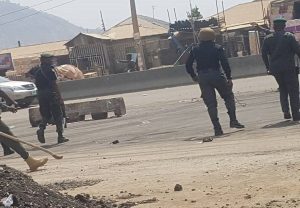 Security checkpoints have been reportedly mounted around Kuje, Soka, and parts of Lugbe in Abuja as personnel of Nigeria Police Force and Army were deployed at each point, Naija News learnt.

According to the report reaching Naija News at this time, the security men were deployed to the locations in the early hours of Tuesday (today), October 20.

Communities near the Nnamdi Azikiwe International Airport, Abuja was also reportedly flooded with Soldiers and Policemen to forestall violation of law and order as the protests against the end of the Special Anti-Robbery Squad of the Nigeria Police Force gets more serious.

Naija News understands that the major roads adjoining the Shehu Yar’Adua Expressway leading to the Abuja airport were blocked by protesters on Monday before some alleged armed hoodlums invaded the area and dispersed them.

The hoodlums were said to have first disrupted the peaceful #EndSARS protests before going ahead to unleash mayhem in the area.