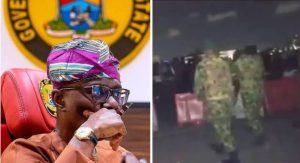 According to General Taiwo, the #EndSARS protests plunged Lagos State into anarchy.

Justifying Sanwo-Olu’s decision to call the military, the soldier stated that the burning of police stations and looting of arms and ammunition; the killing of policemen, blockage of roads and extortion of money from innocent citizens by hoodlums was enough reason.

Taiwo said, “These scenes are reminiscent of the Liberian Civil War when the fighters believed that once they consume human body parts, they would be fortified, they would be strong.

“It was these incidents that made the Governor of Lagos State ask for military intervention and in my opinion, that was the correct thing to do since the police had been overrun and policemen were fighting for their dear lives.”

Sanwo-Olu came under fire since the incident at the Lekki toll gate which has been condemned by local and international civil rights organizations.