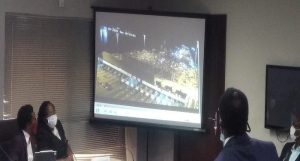 The Lagos State Judicial Panel of Enquiry and Restitution for Victims of SARS related abuses and other matters has begun watching surveillance video of the shooting of peaceful #EndSARS protesters at the Lekki too gate on October 20, 2020.

Recall that soldiers were accused of shooting at #EndSARS protesters, injuring and killing some, an allegation the military has denied despite video evidence on social media.

Naija News reports that the Managing Director of LCC, Abayomi Omomuwa, had submitted the video footage on Tuesday.

Omowuwa had told the panel that the surveillance camera, which has no sound,  stopped working at 8 pm on October 20 when the incident happened.

The LCC MD stated that the footage was retrieved from the surveillance camera mounted by the firm on a mast at the tollgate.

Jelili Owonikoko (SAN), counsel for the Lagos State Government, had suggested that the panel only view some portion of the footage to save time.

But counsel for #EndSARS protesters, Mr Adesina Ogunlana, had countered his submission, insisting the entire footage be viewed on the grounds that “we should not sacrifice quality for speed.”

The footage, which is currently being viewed, shows peaceful #EndSARS protesters at the toll gate on the night of October 20, 2020.