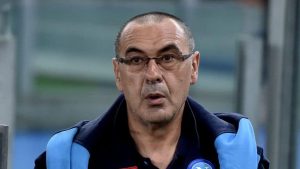 Maurizio Sarri has been sacked on Saturday as the head coach of the Italian giant club, Juventus.

The tactician was shown the exit door after Friday’s Champions League last-16 loss to French Club, Lyon which dumped them out of this years’ European elite competition.

As previously reported by Naija News, Juve recorded a 2-1 victory against French professional football club, Lyon, on August 7 to end the quarter-final stage with a 2-2 aggregate score but Lyon qualified for the next stage of the competition based on away goal advantage.

It is the first time Juventus have failed to reach the quarter-finals of the Champions League since 2015/16 under Massimiliano Allegri.

The Champions League loss is believed to be responsible for Sarri’s sack who only took charge of the club in June last year.

He signed a three-year contract at the time, and led the side to a ninth consecutive Serie A title last month.