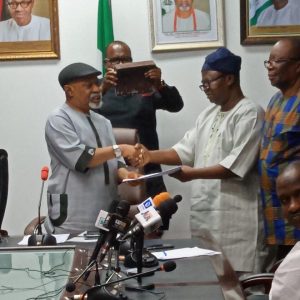 The Muhammadu Buhari-led Federal Government has revealed that it will resume meeting with the Academic Staff Union of Universities (ASUU) on Friday.

Naija News reports that this was made known by the Ministry of Labour and Employment on Wednesday night.

It is gathered that the federal government and ASUU are expected to discuss issues including the contentious payment platform preferred by the union.

In a text message on Wednesday, the Ministry of Labour and Employment spokesman, Charles Akpan, said the dialogue with the ASUU leaders would hold at the minister’s conference hall.

Recall that ASUU had on March 24, 2020, declared an indefinite strike over what it described as the failure of the Federal Government to fulfill the 2019 agreement it had with the union as well as the issue surrounding the migration of members to the Integrated Personnel and Payroll Information System (IPPIS) and other issues.

The Senior Staff Association of Nigeria Universities (SSANU) and the Non-Academic Staff Union (NASU) had also proposed the University General and Peculiar Personnel and Payroll System (UGPPPS) in place of the IPPIS.

Their action followed the complaints against the IPPIS which allegedly caused salary delays and shortchanged the university workers.

Meanwhile, Dr Chris Ngige, the Minister of Labour and Employment, has said if the strike by the Academic Staff Union of Universities (ASUU) was not resolved by next week, the federal government would explore the provisions in the labour law.