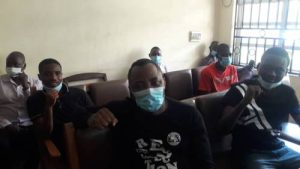 African Action Congress Presidential candidate during the 2019 general elections, Omoyele Sowore and four others have been remanded by a Magistrate Court sitting in Wuse Zone 2, Abuja in Kuje Correctional Centre pending the hearing of their bail applications.

The formal bail of the Sahara Reporters publisher would be heard on Tuesday, January 5, 2020.

Naija News had earlier reported that the activist and four others were arraigned on three charges of criminal conspiracy, unlawful assembly, and attempting to incite others.

They, however, denied the charges levelled against them.

Recall that they were earlier arrested for holding a protest against bad governance on New Year’s Eve in Abuja and were taken to a police unit infamously known as ‘Abattoir’ in the Lokogoma area of the FCT.]

“We have been sent to the infamous Kuje Prison for the next 24 hours while they plot their next moves. But we are very resolute and convinced that this year will be different for the tyrant! #RevolutionNow,” Sowore tweeted on Monday.

However, a human rights lawyer, Femi Falana, SAN,  has stated that he has been directed by SaharaReporters Publisher, Omoyele Sowore, to sue the Nigeria Police Force for torture.

The Senior Advocate noted that the former presidential candidate was badly beaten and subjected to dehumanising conditions in contravention of the Anti-Torture Act.