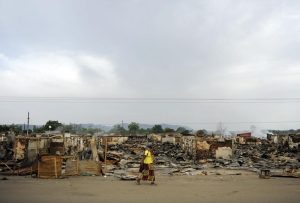 Attack by suspected Fulani militias in four villages in Zangon Kataf Local Government Area of Kaduna State on Thursday led to the death of no fewer than twenty-two people, mostly women and children.

Information gathered revealed that the villages were burnt by the attackers, who were reportedly local Fulani born and while others were raised in the villages.

This is coming at the time the state Governor, Nasir El-Rufai-led government announced a 24-hour curfew as part of measures put in place to ensure law and order in the area since June following unrest in Zangon Kataf that resulted in the alleged killing of a farmer in farmland.

A resident of Atak’mawai, a village in Zamandabo ward that was attacked by the suspected armed Fulani herdsmen, Irimiya Gandu, who confirmed the incident, said no fewer than 13 persons have been killed and many houses were in his community razed down by the attackers.

Gandu in his statement note that the villages were attacked at about 1 am while most people were already asleep, saying, “l woke up the hearing sound of gunshots all over the place. It dawned on me that we have been surrounded by armed gunmen.”

He added, “I stepped out from the house and all l could hear the sound of gunshots around Zango Urban, Apiokim and Kibori villages were already under attack and houses burning at around 1 am. I rushed into my house and brought out my family members and ran to a safer place. As l am talking to you, so far, 13 persons have been killed mostly children and women apart from other places attacked by the gunmen.”

Another resident from Apiashyim, Jonathan Ishaya, said 6 persons were killed during the attack in his community and the village almost entirely razed.

According to him, the Fulani militias invaded the community heavily armed at around 11 pm on Wednesday night and started shooting sporadically.

He noted that security operatives only acted when the attackers had already carried out their heinous act and left.

He lamented, “The security agencies are not here to protect us but to serve the interest of those attacking us.”

He added that most the youths have been arrested for allegedly violating the 24-hour curfew imposed but regretted that the attackers moved freely and carried out the illicit act without any hindrance by the security agencies.