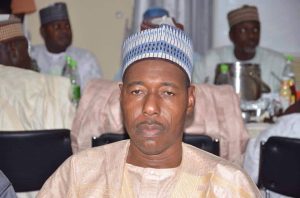 Residents of Magumeri, a community not far from Maiduguri, the Borno State state capital, has cried out to the state government over having no good water to drink in their community in the Magumeri local government area.

According to the people, aside from the constant attack by the insurgents, in the community, they lack good water to drink.

Naija News understands that Magumeri is one of the communities in Borno that has constantly witnessed a series of attacks by the ISWAP and Boko Haram terrorist groups. Speaking to newsmen over the states of livelihood in the community, a local from Magumeri, Fantami Umar said, they have lived with the Boko Haram crisis since its inception in 2010, following the riots in Maiduguri in 2009.

According to Umar, the community’s major problem at the moment is not only the Boko Haram attacks but also the lack of clean water as indigenes have to travel long distances on donkeys in search of water.

He said, “Going out to look for water exposes our people to attack and abduction by the terrorist groups especially our women and girls. For the men, the insurgents will kill and leave the body and streams of blood to wet the ground.”

“It is unfortunate and sad that people are suffering for common drinking water. Lack of drinking water causes people to use water from the streams, which unfortunately is leading to all kinds of diseases as people are also battling with strange ailments as a result of the water they have to make do with.”

Umar revealed further that their elected leaders who reside in Maiduguri were called severally and asked to speak to the government on the plight of the people but none of them came forth.

On his part, Mohammed Tijjani, who had just returned to Maiduguri after the recent attack said, “the situation in Magumeri is critical as the only network of communication in the town is the Glo network which is also epileptic and was also destroyed by Boko Haram during the last attack cutting the people from the rest of the world.”

He added, ” We are appealing to our governor to look into these problems because as we speak if there is any attack, there is no way to communicate and get help for the people. Our so-called leaders and representatives are not patriotic.”

In another news, the Inspector-general of police, Mohammed Adamu has warned against violence in the forthcoming Edo and Ondo state governorship elections.