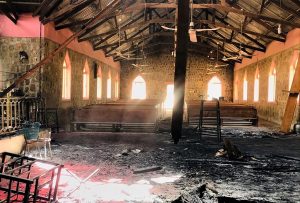 A video has emerged online showing residents of Garkida town in Gombi local government area, Adamawa State, fleeing to the mountains to avoid a recent attack by members of the Boko Haram terrorist group.

Naija News had reported that Boko Haram members last Thursday, December 24th, 2020, attacked the town through the main road in the late afternoon, forcing residents to flee to the surrounding mountains.

The insurgents were, Thursday night, said to have launched the fresh attack by entering Garkida through Gada Uku bridge in 13 Hilux jeeps.

This is the second time this year that the insurgents would be invading the historic town after a similar attack in February.