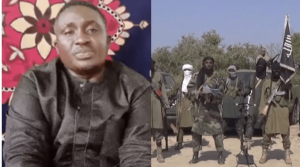 Rev. Polycarp Zango, a pastor with the Church of Christ in Nations (COCIN) in Jos, Plateau State, has been released from the captivity of Boko Haram.

“We have good news! Rev. Zango has been released from Boko Haram custody. It is celebration galore in the Church right now,” he said.

Naija News reports that Zango was abducted by the terrorist group on October 19 while on a journey to a Ministers’ conference in Gombe.

He later appeared in a video released by the Islamic State West Africa Province, ISWAP.

In the video, Rev Zango introduced himself as a cleric at COCIN LCC Wild Life Park, in the Plateau state capital.

He revealed that he was in the custody of ISWAP alongside two other Christian women, who were also abducted.

Zango urged Governor Simon Lalong, and the senator of Plateau North District, Barrister ID Gyang; the Christian Association of Nigeria (CAN), and his local church to secure their release.

Naija News cannot independently verify if the two other women were released alongside the pastor as at the time of filing in this report.