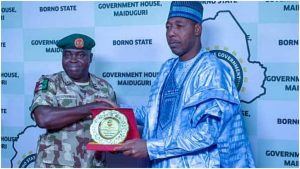 Governor Babagana Zulum of Borno State, has been condemned by the Unity Youth Forum (UYF) over his statement that he would engage hunters to keep Baga safe if the military fails to secure the town.

Recall that Zulum stated this after his convoy was attacked by Boko Haram insurgents in Baga, while on his way to some internally displaced persons (IDP) camps in Kukawa local government area of the state.

The governor had accused soldiers of attacking them, by the Defence Headquarters in it reaction noted that Zulum was attacked by Boko Haram.

UYF while reacting to the Governor’s statement warned Zulum and his officials that any attempt to disparage the military is an act of ingratitude to the troops on the frontlines as well as President Muhammadu Buhari.

The group condemned the Borno State Governor for such statement after benefiting from the military operations since 2015.

President of the forum, Comrade Isah Bello Isah, in a statement on Friday, said Nigerians are fed up with Zulum’s persistent show of emotions without putting in place the necessary strategic actions.

According to Isah, Zulum by his utterances has not shown appreciation for the efforts of Mr. President to rid the nation of insurgency.

On behalf of the forum, Comrade Isah, however, advised: ”Zulum to stop acting like a sophomore undergoing training in leadership and learn to show more maturity”.

The Unity Youth Forum stated that there is more about governance than playing to the gallery”, urging the governor to give respect to whom it’s due.”

Read the full statement below:

“After years of monitoring the coordinated efforts by the current administration via the Nigerian Armed Forces, to dislodge Boko Haram and ISWAP terrorists in the Northeast and particularly Borno State, the Unity Youth Forum (UYF) is saddened by recent developments involving the military and the Borno State governor, Prof. Babagana Umara Zulum.”

“The Borno State governor was recently captured on camera trying to vilify the military by accusing them of being behind the attack on his convoy at Baga while returning from a duty tour of Monguno LG in Borno State.”

“Prof. Zulum, after the incident, was seen in a widely circulated video, challenging the military and querying how possible it is for Boko Haram to launch an attack in Baga when according to him there are over 1200 military personnel there.”

“His conclusion which was not as a result of any known investigation but basically made out of emotion has however come as the unkindest cut of all past and present attempts by a few to disparage the military.”

“This is because Borno, and by extension Zulum, has been the greatest beneficiary of military operations in the Northeast such that ordinarily, it should have been the last to join in any attempt to mock the military institution in Nigeria.”

“The military also clashed with Borno State government officials led by the deputy governor of the state, who insisted that people must be tested for Covid-19 before being allowed to enter the state against security advice.”

“Then, the recent unfortunate outburst of the governor in Baga and his threat to use hunters instead of the military to fight Boko Boko Haram.”

“In all these occasions, the Borno State governor and his officials had come down heavily on the military without showing appreciation for the much it has done to save the state.”

“We, therefore, see the attempt by the Borno State governor and his officials to disparage the military as an act of ingratitude not just to the military, but to President Buhari who is doing his best to secure the nation.”