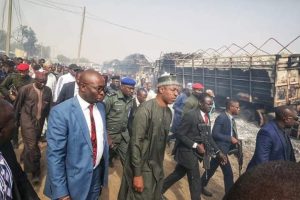 30 people have now died after the convoy of Borno State Governors, Babagana Zulum, was attacked by Boko Haram terrorists.

Security sources have revealed to AFP that the number of fatalities from the attack Friday had doubled as more bodies were found and now included 12 policemen, five soldiers, four members of a government-backed militia, and nine civilians.

“The tally has increased to 30 as many bodies were picked in the surrounding areas after the attack,” one of the sources said, adding that “many people were injured”.

Naija News had reported that the attack, which was said to be an ambush, resulted in the killing of 15 security personnel including soldiers and policemen attached to the Governor’s convoy.

A security source quoted by AFP on condition of anonymity said eight policemen, three soldiers, and four members of a government-backed local militia were killed in the attack on the Governor’s convoy near the town of Baga on the shores of Lake Chad.

The Jihadist fighters opened fire with machine guns and rocket-propelled grenades as the convoy was passing through a village close to the headquarters of the Multinational Joint Task Force.

“The governor escaped unhurt but 15 security men on the convoy were killed in a fierce battle with the terrorists”, one source said.

Governor Zulum according to the reports was on an assessment tour of Baga in preparation for the return of thousands of residents displaced from the town by the jihadists in 2014.

Recalls gunmen suspected to be members of the dreaded Boko Haram sect had in July 2020, attacked the convoy of the Borno State Governor, Prof. Babagana Zulum, in Baga Town.

The governor was reportedly on his way to visit some internally displaced persons (IDP) camps in the northern part of Borno when his convoy was attacked.

The attack happened near Monguno while en route to distribute food to displaced residents. Monguno and Baga axis of Borno has been totally cut off from mobile phone services.