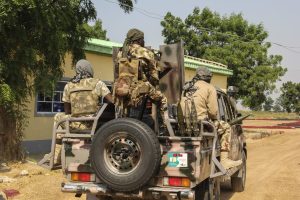 The camps served as training grounds for the terrorists and hideouts for an ambush of military personnel.

“We cleared Maiyanki, Darussalam, Bula Kurege and have now taken over Izza, all former Boko Haram strong-points. Troops have been repeatedly attacked in these harbour areas”,

“Heavy casualties were inflicted on the enemy. The situation is tough but we are winning. Sadly, a soldier paid the supreme sacrifice and 3 injured. We brought them out. Our resolve and commitment is unshaken.”