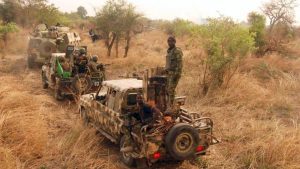 Five soldiers of the Nigerian Army have been killed during an operation in Borno State after the troops ran into a landmine planted by Boko Haram terrorists.

15 other soldiers were also wounded during the incident which occurred in a remote village in the Southern area of Borno State.

An officer from the 117 Battalion, 28 Task Force Brigade were part of those who lost their lives, security sources confirmed.

Naija News gathered the incident happened at about 10.20am near Kwada Kwamtah Yahi village in Chibok Local Government Area of Borno State when the Army vehicles (two Hilux vans) ran over a massive landmine bomb that exploded, resulting in the death of the soldiers.

“It was a sad encounter for us in Chibok when our escort commander’s car ran over a landmine and the van was damaged completely.

“I saw the vehicle being tossed up into the air. We managed and summoned courage to evacuate the corpses of the fallen heroes including a lieutenant and four soldiers.

“Not fewer than 15 others sustained various degrees of injuries; they are currently receiving medical care at 28 Task Force Bridge Clinic in Chibok,” a top vigilante member, Yohanna Bitrus, who was part of the clearance operations narrated as reported by Daily Trust.

Another security source also confirmed the unfortunate incident, explaining that; “It happened yesterday; we lost some gallant soldiers but that won’t deter our determination to wipe them out in our current campaigns.”

Meanwhile, the presidency has submitted that the security situation in Nigeria has improved since the administration of President Muhammadu Buhari assumed power in 2015.

This was contained in a statement by the special adviser on media and publicity to the president, Mr. Femi Adesina where he highlighted major achievements of the military under the current administration.

Adesina in the statement released to mark this year’s Armed Forces Remembrance Day, said a lot has been achieved by the military “in tackling security challenges in the land, towards fulfilling the constitutional requirement of Government guaranteeing the protection of lives and property.”

This is even as the Nigerian Military has boasted that no single territory in the North East remains in the control of Boko Haram terrorists.

This was disclosed on Friday by the Coordinator Defence Media Operations, Major-General John Enenche who noted that all territories previously occupied by the insurgents have now been reclaimed by the military.