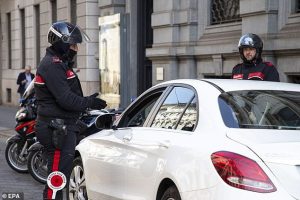 It has been reported of another black man allegedly murdered by the United States police.

According to the report reaching Naija News at this time, the 29-year-old man killed was alleged to have owned a handgun but had dropped it during a violent altercation in Los Angeles, triggering fresh outrage as tensions soar over racism and police brutality.

Dijon Kizzee was reportedly riding on his bicycle in the noon hour of Monday, August 31 when Los Angeles County Sheriff’s deputies attempted to stop him over an unnamed vehicle code violation.

A police report claimed that Kizzee had taken to his heels on foot but was chased by officers. It added that the suspect when caught up with, punched one deputy in the face, letting down pieces of clothing he was carrying.

“The deputies noticed that inside the clothing items that he dropped was a black semi-automatic handgun, at which time a deputy-involved shooting occurred,” Lieutenant Brandon Dean revealed to newsmen.

However, it was not confirmed if Kizzee had attempted to reach for his alleged gun when he was shot. Dean said officials had yet to interview the deputies involved.

“So, he did not have the gun in his hand, it had already dropped to the ground, so when he was actually shot, he was unarmed at that point?” a reporter asked during the televised press conference.

“I don’t know that,” Dean replied, adding later, “If this individual was reaching for a semi-automatic handgun, I would suggest … that’s probably why deadly force was employed.”

Naija News, however, understands that the young man was declared dead at the scene.

Up to 100 people gathered at the scene demanding justice in the hours after the shooting, according to local media.

“What’s the use of having the prison system if you all are just going to kill us,” one woman told a CBS News reporter through tears. “What are you all here for? Who are you protecting?” she asked.