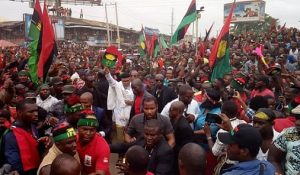 The Indigenous People of Biafra (IPOB) has condemned the Nigerian Air Force raid of Orlu and Orsu Local Government Areas of Imo State, stressing that it was the beginning of the second Nigeria/Biafra war.

Recall that the military had on Thursday launched land and air operations against operatives of Eastern Security Network (ESN) believed to be in the forests in Orlu and its environs.

In a statement on Saturday by its Media and Publicity Secretary Emma Powerful, IPOB said that Nigeria had officially declared war against Biafra.

The pro-Biafr group vowed to protect Biafran land from Fulani herdsmen, adding that the world has kept mute despite complaints and petitions over unprovoked genocidal attacks by killer herdsmen and terrorists against indigenous people in Nigeria.

The statement read in part: “We wish to bring to the attention of the whole world that the Nigeria military has, at last, brought war to Biafra land. Supported by other security agencies, including police and the Department of State Services, they came with military jets, tanks and heavy war equipment against us.

“Yes, the second Nigeria/Biafra war has begun! It began on Thursday, February 18, 2021, at Orlu in Imo State, Biafra land.

“The Nigeria military has simultaneously launched both land and air attacks on us. After the genocidal war of 1967-1970, in which they killed over five million innocent Biafrans, they have come again to bomb Biafrans under the pretext that they are hunting the gallant personnel of Eastern Security Network ESN guarding our forests against killer herdsmen and terrorists on a rampage in our land.

“Days before the raid, they first abducted a synagogue priest, Mazi Egole, and his household, branding them IPOB members. On February 16, they abducted Mrs Ngozi Umeadi, who they learnt took care of those injured during the #EndSARS protest.

“Not done yet, they took Dr. Stephen Irochi of Multicare Hospital and some injured #EndSARS protesters from Obigbo receiving treatment at the hospital.

“The government, which could not defend Biafrans against incessant unprovoked attacks against indigenous Nigerians, has now mobilised its land and air force against ESN patriotically and voluntarily doing the job that Nigerian security forces wickedly refused to do. The crime of ESN is defending locals against Fulani herdsmen.”

“Orlu and its environs are now a theatre of war declared by the Nigeria government against innocent Biafrans. Scores of innocent civilians have already become casualties! Orlu and its neighbouring Orsu LGAs have been under heavy bombardment by the Nigeria Airforce since yesterday, February 18, 2021.

“We have no choice but to defend our ancestral land. We have complained enough, written petitions but the world turned blind eyes.

“The media refused to give us an audience. Nobody seems interested in our story but like the Jews, we must look unto our God and courageously fight back like heroes. In the end, Biafra will come!”