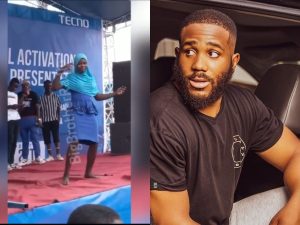 A young Nigerian Muslim girl has stirred hilarious reactions on social media after she appeared in a viral video dancing with Hijab and skirt at a Tecno mobile Black Friday special activation event.

Netizens in their reactions to the young girl’s dancing skills compared her with former Big Brother Naija housemate and billionaire son, Kiddwaya.

Although, there is no connection in whatever way between the girl and Kiddwaya, Nigerians on social media linked the BBNaija reality star’s style of dance to the young girl’s dance steps.

Naija News understands that the unnamed girl’s moves threw the audience and organizers of the show into a state of laughter as she twists in sideways with different styles.

Watch the trending video below:

Though it is unconfirmed if Kiddwaya has seen the video or not, netizens, however, prayed that it happens so as it could be the girl’s lucky time to meet with the billionaire son.

Meanwhile, Kiddwaya has revealed one of the reasons he loved Erica than all other housemates in the Biggie house