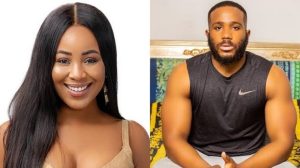 Terry Waya, the billionaire father of big brother Naija housemate, Kiddwaya, has in a new interview he granted stated that if his son wins the competition, he would make sure he gives half of the money to his love interest, Erica.

He further noted that the other half of the price would be donated to charity.

This, Terry disclosed in an Instagram live chat with journalist, Dele Momodu, on Tuesday night September 8.

He praised Erica for loving his son Kiddwaya unconditionally and being by his side during her stay in the house. While expressing how sad he was when she was disqualified.

”Erica is a wonderful person. She is nice. Really it is not my business about what is happening between her and my son because I cannot force anybody on my son but to me as a humanbeing, she is a wonderful person. She has a very good heart and really if my son should win this, I will make sure that he gives her half of his winning and the rest half to charity” he said

from the BBNAIJA lockdown house. In an IG live interview with Dele Momodu, Waya who is the father of Erica's love interest in the house, Kiddwaya, said he was saddened by her disqualification. He said Kiddwaya's older brother is in touch with her. He also said if Kidd wins the show, he will make him give Erica half of the money and the remaining half to charity.