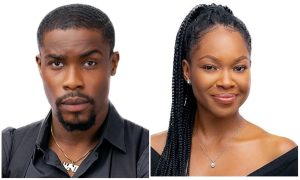 BBnaija housemate, Dorathy has revealed the reason Why  she doesn’t like Neo

According to Dorathy, Ka3na said Neo twas only  in the house to show himself to sugar mummies on tv and that he is just using Vee for cover but will dump her when the show is over. This narrative is believed to be the reason Dorathy has second thoughts about him and his loyalties.
Dorathy has also warned Ozo to thread carefully in his relationship with him.

Speaking with Ozo about his friendship with him and the negative effect it has on his game, Dorathy said her energy doesn’t match with Neo’s because of what Ka3na told her a while back.

Dorathy called Ozo’s attention to his closeness with Neo, saying he has gotten fined for microphone infringement due to his recent closeness with Neo. She advised him to focus more on the price and not give chances for any distraction.

“Neo speaks in low tones and gets away with it unlike you.

“I didn’t want to mention it earlier because I like to mind my business and not get involved with anything that involves others,” she said.

Dorathy and Ozo used to be very close until he picked interest in Nengi.

Emuobonuvie “Neo” Akpofure (26), popularly referred to as Neo, is a ride-hailing app driver and a Delta State native. Although he describes himself as fun, tolerant, loving and smart, he won’t hesitate to be Indaboski Bahose when it comes to issues concerning bullying and inequality.

However Last night, became more intresting as the housemates engaged themselves in a fun filled rap battle and during the battle, Dorathy and Vee threw shades at themselves.

The activity was going smoothly until Dorathy used her rap to shade Vee that she doesn’t have edges on her hair. Vee in her own rap session, body shamed Dorathy.
Vee said Dorathy’s head tends to be bigger than her body. Vee went as far as saying she can fit in her fat toes into Dora’s wide gap teeth.