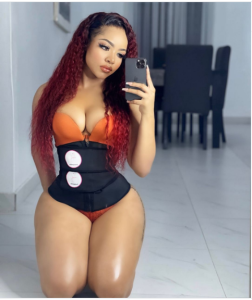 Former Big Brother Naija housemate, Nengi Rebecca Hampson has revealed why she refused to join other housemates of the season 5 edition of Nigeria’s biggest reality show in a WhatsApp group chat.

While interacting with her loyal fans recently in Abuja during the meet and greet session in the capital city of Nigeria, the Special Senior Assistant to governor Douye Diri of Bayelsa State noted that her decision to snub the social media group created by her fellow housemates in the Biggie house was intentional.

Nengi said she refused to be part of the social group to relieve herself of unnecessary stress and drama from people she careless about.

Naija News understands that the reality star even while in the biggie house doesn’t go along with the likes of Erica, Kiddwaya, Ka3na, Dorathy, Prince, and a few others. Meanwhile, it was reported that all of the above-mentioned names are in the WhatsApp group.

Reports claimed that Nengi during the meet and greet event with her Abuja ninjas received a series of gifts and that the event was groundbreaking.

Watch Nengi in the video below as she responded to questions during the event.

Nengi gushing over the #JowoVideo

I Stan a versatile Queen

Meanwhile, Nollywood actress, Regina Daniels and her brother has agreed to marry each other should Ned Nwoko marry another wife to his collection of wives.