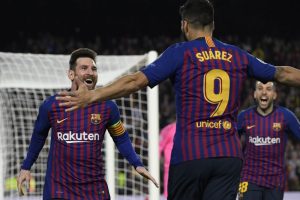 The injured Suarez may be out for up to four months and Barca is keen to find a suitable replacement for him.

The club is said to be exploring the possibilities of signing Arsenal striker Pierre-Emerick Aubameyang or Chelsea center forward Olivier Giroud before the end of the January transfer window.

The two players are considered ideal players to fill the gap created by the injured Suarez.

Barca’s new manager, Quique Setien is also understood to have tabled his request before the club’s management.

Meanwhile, Paris Saint-Germain attacker Edison Cavani has also been linked with the La Liga giants, after the Uruguayan striker submitted a transfer request to Ligue 1 outfit as he pushes for an exit from the Parc des Princes.