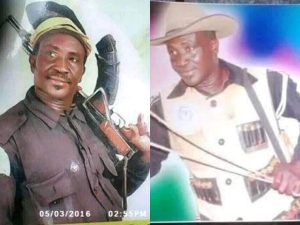 Naija News learnt that Mori died in a gun duel with some unidentified gunmen in Kaduna State yesterday.

The deceased was said to have been helpful to security operatives in fighting banditry and kidnapping in the northern region.

Confirming Mori’s death, Salihu Wobkenso, Head of Administration of the group, said the gallant hunter was overpowered by some cattle rustlers in the Kaduna State a few hours ago.

He said, ”This is sad news to hunters. Young Mori, one of our hunters in Adamawa State from Guyuk LGA has been overpowered by cattle rustlers in Kaduna State in the early hours of today.”

Mr Wobkenso noted that all fellow hunters in the region and residents of his community were left in mourning following the report of his death.

‘’The gallant General Young Mori has answered the home call, though you have gone by the will of God but your spirit is still with us. Rest well, Zwalka Nungurau,’’ said one Johnson Gwadamdi, while reacting to Mori’s death.

It was gathered that a boy, Amos, and four others were killed in the clash between two cult groups in Lobia II village in Southern Ijaw Local Government Area of ​​Bayelsa State.