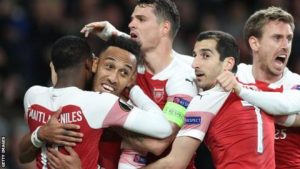 English Premier League side, Arsenal have qualified for the fifth round of the FA Cup, after defeating Bournemouth at the Vitality Stadium on Monday.

18-year-old player, Bukayo Saka, scored a goal for the Gunners and set up another as the North London side qualified for the next round.

Eddie Nketiah scored the second goal for Arsenal on his first start of the season and secured a tie for the Gunners with Portsmouth.

Bournemouth striker, Sam Surridge, scored a late goal for his side, but the hosts could not find an equaliser as they crashed out of the competition.

The Gunners scored their first goal with 22 passes leading up to Saka’s fine opening goal.

“Mikel is trying to bring back the philosophy of the Arsenal way. We did that well in the first half, not so much in the second half,” Saka told BT Sport.

“It was just a poor start. Tough first half hour and we struggled to deal with their movement. We weren’t ourselves. But for the last 60 minutes, we scrapped and almost got something in the end.”