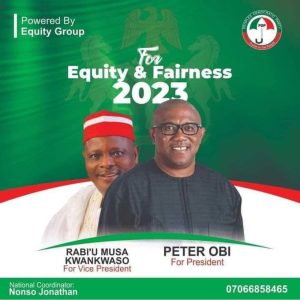 Nigeria’s 2019 Vice Presidential candidate Peter Obi has said he has no hand in a poster with a picture of himself and former Kano governor Rabiu Kwankwaso running for the presidency.

According to the poster the two leading politicians are running under the PDP, the country’s main opposition party.

In a message posted on his Twitter account, the former governor of Anambra State, said: “I am not a part of the poster being circulated.”

I am not a part of the poster being circulated. -PO pic.twitter.com/2KvNuOX6tG

He did not elaborate but the people who commented on his message praised him for clearly distancing himself from the poster.

So far, former Kano governor Senator Kwankwaso has said nothing about the poster.

Former Kano Governor Kwankwaso contested against Alhaji Atiku Abubakar in the PDP primary election which was won by Atiku.

Political observers say Senator Kwankwaso and Atiku Abubakar will want the PDP to field them in the 2023 general election, especially following allegations that President Buhari’s government has failed to deliver on its promises to improve the lives of Nigerians. – allegations it has repeatedly denied.