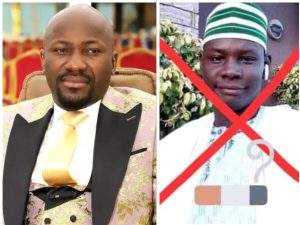 The decision of an Upper Sharia Court in Kano State, to sentence a musician, Yahaya Sharif-Aminu, to death for blaspheming Prophet Mohammed, has been met with criticism from various persons

Naija News recalls that before he was  arrested protesters burnt down his family home and gathered outside the headquarters of the Islamic police, known as the Hisbah, demanding action against him. he was later arrested and sentenced to death.

however, in a reaction to the development, The General Overseer of Omega Fire Ministries International, Apostle Johnson Suleman, said it is ironic that Nigeria which pardons Boko Haram members could support the killing of a man for blasphemy.

He tweeted, “A country that pardons terrorists want to kill a man for blasphemy. I am sure even Saudi Arabia is shocked… the worst form of deception is self-deceit.”

A country that pardons terrorists wants to kill a man for blasphemy..I am sure even Saudi Arabia is shocked..the worst form of deception is self deceit…