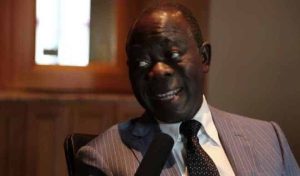 The National Chairman of the All Progressives Congress (APC), Adams Oshiomhole, has condemned the burning down of a venue scheduled to host a rally of the ruling party.

Naija News reports that the political rally was organised to receive some defectors into the APC.

It was gathered that the suspected thugs burnt two cars, over 1000 chairs, canopies and the stage at about 2 am on Saturday morning.

According to a source, the hoodlums fired shots before setting the venue for the rally ablaze.

Alhaji Abubakar Akokhia, the factional Chairman of APC in the LGA, insisted that the rally would still hold despite moves by the thugs to disrupt it.

It was learnt that heavy security was being deployed to the area to forestall any attack.

Speaking during the rally which later held, Oshiomhole maintained that the APC under his leadership would continue to embrace peace.

According to Oshiomhole, “When I was told that they burnt this place last night, I said they must be prepared to put more fire in other places because they can’t stop us. But don’t allow anybody to push you to any length that will provoke you to fight. Those who think they have power to fight should channel such energy into the opposition parties. What is happening here should reinforce our confidence in God. When God decrees peace, nothing can stop it, when God say it, no man born of a woman can stop it.

“I don’t want to be a national chairman who will campaign across the country and will not be able to win his polling unit because politics is local. There are people who think that when they reach a high level, they forget the local (level). I was governor; I am no longer governor, I am national chairman today, tomorrow I will no longer be national chairman. Let me tell those people in high places that the only permanent place is the grassroots. Politics is a game of numbers not a game for the powerful because on election day all have one vote.”

The former Edo State governor also stated that the wants to remain a grass-root politician that can win his polling unit during elections.

He said: “I don’t want to be an Abuja politician who cannot win my unit and ward election.

“If I don’t win my place, how will I deliver the President and how will I be a useful national chairman?

“I will play national politics and I will also play unit, ward, local government and state politics because if you are disconnected with local politics, you are not going anywhere in politics.”