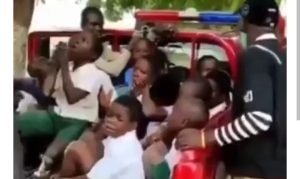 Amotekun operatives have arrested some students of a yet to be identified primary school in the South-West in a bush during school hours.

According to a viral video, the pupils were found in the bush mimicking a popular singer Azeez Adeshina Fashola who is professionally known as Naira Marley.

However, the singer reacted to the video of the pupils being arrested by Amotekun. The singer was so angry and furious seeing the video and has condemned the act of Amotekun personnel who arrested the pupils.

The singer sees it as child abuse and has asked people to find out the name of the school so he can go and question the school authority on why the school invited security personnel to arrest the kids.

“How can you arrest school kids? This is child abuse. The teachers and this stupid uncles with guns need to get arrested.

“I want to meet all these kids I owe them � � please help me with the name of the school or link me up with any of my Marlian Kids.

“Thanks. I wanna see the witch behind the camera self. Wtf is amotekun self?? If they treat ur child like this, what would u do? Did u see the slap?? U calling someone child criminal?? Omoo I’m so angry�� give me school name pls. I need to go there”.