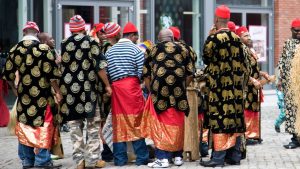 The Governors of Southwest have been commended by the Ohanaeze Ndigbo Worldwide over their peaceful resolution towards the actualisation of Amotekun.

Recall that the Attorney General of the Federation and Minister of Justice, Abubakar Malami had declared the security outfit illegal.

Ohanaeze in a statement released through its spokesperson, Mazi Chuks Ibegbu, on Friday commended the Federal Government for reviewing its earlier position on the establishment of the regional security outfit.

It said, “Amotekun is like a Vigilante group and people have the right to protect themselves against marauders and killers especially when our conventional security apparatus is unable to do that.”

“We warn those still making provocative comments on the matter to desist from doing so in the interest of the nation.”

“Ohanaeze equally warn all criminals, killers, hoodlums and rituals hiding in any forest in the country especially the southern Nigeria to flee now in their own interest or regret their lives”.

The Governor of Ondo State, Rotimi Akeredolu had revealed yesterday after a meeting between the Governors, the Vice President, Yemi Osinbajo and Malami that they will seek for legal framework towards the security outfit.

Akeredolu while addressing State House correspondents after the meeting, said: “We held a very fruitful discussion, the governors of the South-West were there. The meeting was presided over by the Vice President, the AGF was there and the Inspector General of Police.”

“We have rubbed minds and all of us have agreed on the way forward. The most important thing is that we are going to have the legal framework to back this Amotekun. And this legal framework is going to be one in which all of us will look at and we will be sure that it goes without any hindrance”.