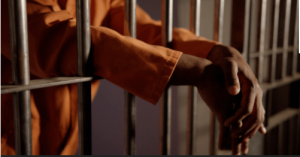 An American lady has been arrested by officers of the Nigerian Immigration Service (NIS) at the Murtala Muhammed International Airport (MMIA), Lagos for alleged murder.

The lady identified as Kari Ann O’Rourke was arrested in the early hours of Tuesday and handed over to the Airport Police Command.

She was said to be have been declared wanted over the murder of a Nigerian at a hotel in Victoria Island, Lagos, where she stayed.

Rourke, with passport number USA 558565339, was accused of murdering one Adebayo Michael Ayomide and planning to flee the country when she was nabbed.

The suspect was said to have arrived in the country with a 24-month multiple visa issued in Atlanta, USA, on 7th January 2020.

She was about to travel out of the country aboard a KLM flight on Tuesday.

A source at the airport told Daily Trust that she could not proceed on the trip because her COVID-19 test certificate had expired.

She was said to have been apprehended at the Departure Hall of MMIA by immigration officers and FAAN Aviation Security (AVSEC) at the Qatar Airline counter before she was taken to the NIS duty room at about 12:30 am on Tuesday.