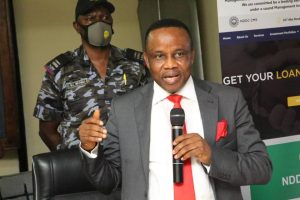 The Senate has ordered the arrest of the sole administrator of the Niger Delta Development Commission (NDDC), Effiong Akwa.

Naija News reports that the Senate Committee on Ethics, Privileges, and Public Petitions ordered the Akwa’s arrest over the failure of the immediate past Interim Management Committee (IMC) to appear before it.

The panel is probing the alleged diversion of N6.25 billion meant for the purchase of COVID-19 relief items for the Niger Delta.

The lawmakers began probing the IMC led by the former Acting Managing Director of NDDC, Kemebradikumo Pondei, after the chairman of the agency’s COVID-19 palliative distribution committee, Sobomabo Jackrich, petitioned the senate.

In his petition, Jackrich had alleged that the aforementioned sum approved by President Muhammadu Buhari was diverted by the Pondei-led IMC.

The lawmaker also alleged that spoiled food was procured to be distributed to the Niger Delta people.

In his remarks on Monday, chairman of the committee, Patrick Akinyelure, said the disbanded IMC had failed to appear before the panel despite being invited five times.

He said the committee thereby resolve to request a warrant of arrest to be issued on the sole administrator of the NDDC, Effiong Akwa, to produce Pondei and his team.