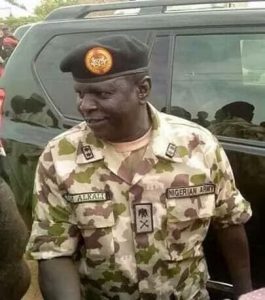 The death has been reported of Hajiya Halima Alkali Umaru, mother of late Major General Mohammed Idris Alkali, former Chief of Administration of the Nigerian Army.

Hajiya Umaru was said to have passed on at the age of 101 according to family sources.

It will be recalled that Major General Idris Alkali, a former Chief of Administration, Army Headquarters, Abuja, was declared missing on September 3 2018 on his way to Bauchi after leaving Abuja in the morning.

After many days of searching, the remains of his body and his car were discovered in a pond in Plateau State.

The mother of the late general has now been confirmed dead at the age of 101. Hajiya Halima was said to have died in the early hours of Thursday, January 28, 2021 at her Potiskum home town.

“While we appreciate the Almighty God Allah for sparing her life thus far, we must confess that we will sorely miss her counsel, motherly role and impact on the lives of her children and the grandchildren.

“She’s survived by children and many grandchildren. A very religious, principled and disciplined mother.”

Funeral and burial arrangements are in top gear “her funeral prayers will hold today morning by 10:00 am at Potiskum Central Mosque, Yobe State”, the source noted.

Meanwhile, the Seriki Fulani of Igangan, Alhaji Salihu Abdulkadir, has revealed how much he lost to the invasion of the Fulani settlement by popular Yoruba rights activist, Sunday ‘Igboho’ Adeyemo and his supporters recently.

Naija News reports that Igboho had issued a seven-day ultimatum to herders to leave Igangan town in Ibarapa local government area of Oyo State over the high rate of kidnapping, rape, and killings in the community.

After the expiration of the ultimatum, Igboho stormed the town with his supporters to effect the eviction order.

Addressing reporters in Ilorin, Kwara state on Thursday, Abdulkadir denied complicity in some of the alleged kidnapping incidents in the area.

He also refuted being an accomplice in the killing of an indigene of the town, Dr Fatai Aborode, who was gruesomely murdered by suspected herdsmen.