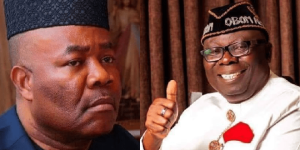 The victorious senator has today taken an oath as issued to him by the Deputy Clerk of the Senate, Musa Abdullahi.

Naija News understands that the newly elected senator won in the Akwa Ibom rerun election, as declared by the Independent National Electoral Commission on January 25, following a court order also.

Recall also that in December last year, Minister of Niger Delta affairs, Godswill Akpabio, had pulled out of the Akwa Ibom North-West senatorial re-run election scheduled for January, giving reasons that as a minister, a huge responsibility had been placed on him and that he could not “abandon a critical assignment” placed on him by President Muhammadu Buhari in pursuit of a re-run election.

However, Akpabio, who contested the February 2019 National Assembly election as a sitting senator on the platform of the All Progressives Congress, had dragged Ekpeyong to court but fortunate for Ekpeyong, the Appeal Court later directed INEC to conduct a fresh poll which saw to victory again on January 25, 2020.