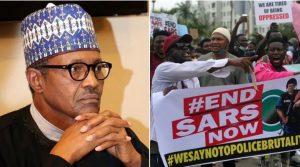 The Federal Government led by President Muhammadu Buhari, made negotiations with #EndSARS protesters impossible by coming up with different excuses, Aisha Yesufu, a Nigerian socio-political activist, and co-convener of the Bring Back Our Girls (BBOG) movement.

Naija News reports that Mrs. Yesufu who is one of the prominent faces of the #EndSARS movement for police reform, made this comment on Sunday in a virtual interview with academic and historian, Toyin Falola.

The #EndSARS promoter insisted that #EndSARS protesters were ready to dialogue with the federal government before violence erupted in the country but the latter frustrated the conciliatory efforts.

Yesufu also said the over two weeks nationwide demonstration was not infiltrated by hoodlums as said by the government.

The co-convener of the Bring Back Our Girls (BBOG) movement also condemned the freezing of the bank accounts of #EndSARS promoters by the Central Bank of Nigeria (CBN).

Last month,  the #EndSARS demonstrations led to the disbandment of the Special Anti-Robbery Squad  (SARS) of the Nigeria Police Force (NPF). After the scrapping of SARS, Mohammed Adamu, the Inspector-General of Police, came up with the Special Weapons and Tactics team as a replacement for the scrapped police unit.

The #EndSARS protests later turned bloody nationwide when rampaging hoodlums took to the streets and wreaked havoc on lives and properties in the country.