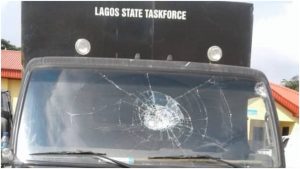 A fresh clash has broken out in Lagos State on Wednesday between commercial motorcycle operators popularly known as Okada and operatives of the Lagos State Task Force.

It was gathered that members of the task force and commercial motorcycle riders clashed on the Ikeja Along, Lagos-Abeokuta Expressway with the okada riders chasing away the taskforce operatives.

It’s the second day of clashes between the two parties after Naija News also reported on Tuesday that hundreds of Okada riders alongside hoodlums on Tuesday attacked officials of the Lagos State Task Force.

The violence happened at the Second Rainbow area on Apapa-Oshodi expressway in Lagos State.

Again on Wednesday, viral videos have appeared on social media showing another clash between the Okada operators and personnel of the Lagos State Task Force.

The task force officials later retreated into their vehicles and escaped from the scene as the okada operators chased and pelted them with all kinds of materials.

Watch a video of Wednesday’s incident.