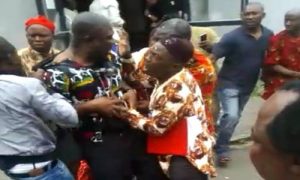 Security aides of the former Deputy Senate President Ike Ekweremadu reportedly had to whisk him away on Sunday in Ulunya, Ovoko, Igbo-Eze South LGA of Enugu State when some suspected thugs invaded a football pitch where he kicked-off a match.

It was gathered that some hoodlums who were not comfortable that a football tournament was sponsored by Ike Oha Foundation, owned by Ekweremadu, pulled down the goalposts and allegedly chased the lawmaker and his entourage out of the match venue.

Speaking to newsmen, some youths in the community accused the member representing Nsukka/Igbo-Eze South Federal Constituency in the House of the Representatives, Pat. Asadu of hiring the thugs to attack the lawmaker.

When contacted, Asadu denied any involvement in the alleged attack on Ekweremadu, saying “At my level, there is hardly anything that would happen in Ovoko and the people won’t call my name. I didn’t know that Ekweremadu was coming to my country home. I only read that on social media. How he came and where he went are his personal businesses which he has a right to embark on.

“Anyone alleging that I hired some boys who pulled down the goalposts where he was to kick-off the football match should provide evidence linking me to the incident.

“What I noticed was that there was a football tournament which the vigilante group said they should not play because they noticed the politics and the misgivings involved.

“For the 24 years that the tournament held, this is the first time that the football association is inviting someone from Aninri or Orba or any community outside Ovoko to sponsor it. Therefore, some people were not comfortable with the arrangement and they went to court to obtain an order to stop it.”

Also speaking on his reported attack by hoodlums in his hometown, Ekweremadu insisted that no one can distract him from bringing good governance to the people of the state.

According to the lawmaker, he would continue to execute some development projects in Enugu North Senatorial District.

Ekweremadu stated that he would equally continue to support Ovoko Football Association in order to discover talented footballers from the community.

Recall that members of the proscribed Indigenous People of Biafra (IPOB) had in 2019 attacked Ekeremadu during a meeting in Nuremberg, Germany, where he was attending the New Yam Festival of Igbo community in that country.