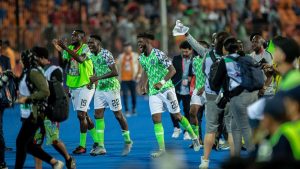 Super Eagles Coach, Gernot Rohr has released the team list for the Super Eagles players that will face Sierra Leone on Tuesday in the Africa Cup of Nations qualifier match between the two countries.

Both teams had earlier played out a 4-4 draw in the first leg played in Nigeria.

The trio of Etebo, as well as Alex Iwobi (Everton) and Joe Aribo (Rangers), in the midfield.

The match is scheduled to kick off by 5pm (Nigerian time) at the Siaka Stevens Stadium in Freetown, the capital city of Sierra Leone.