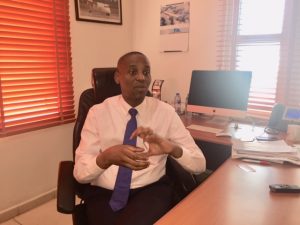 It was gathered that Ado Sanusi’s resignation took effect on December 31, 2020.

Captain Sanusi started his flying carrier at Nigerian College of Aviation Technology, Zaria where he obtained Commercial Pilot Licence and a National Diploma in Aeronautical Sciences, according to information from his LinkedIn page.

He then proceeded to the United States where he advanced his education and obtained his Air Transport Pilot Licence, Certified Flight and Ground Instructor’s license.

He worked for Kabo Air, a local airline as a Senior First Officer and then proceeded to ExxonMobil as Captain and flight Safety Officer.

He then joined Virgin Nigeria as a Captain on the B737 Classic.

He joined Arik as a Captain on the Boeing 737-NG and became a Trainer, Chief Pilot, DFO and SVP Operations/DMD of the biggest airline in West and Central Africa, a position he held till 13th February 2017. He served as the CEO of Aero Contractors Nigeria Ltd for close to four years.