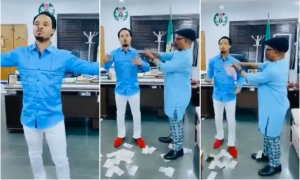 The Governor Of Abia State, Okezie Ikpeazu, has suspended the state’s Chief of Staff for Anthony Agbazuere.

According to TheCable short statement on Sunday, Chris Ezem, secretary to the state government, announced that the CoS has been suspended immediately.

”Abia State Governor, Dr Okezie Ikpeazu, has directed the immediate suspension from office of the Chief of Staff to the Governor, Dr ACB Agbazuere,” he said.

A few months ago we reported that Odumeje has welcomed a new baby with his wife, Uju Ohanaemere.

Naija News reported that Prophet Odumeje, who is the Spiritual Director of Mountain of Holy Ghost Intervention Deliverance Ministry World Miracle Center, alias Land of Freedom in Onitsha, Anambra state, disclosed this in a post on social media on Saturday.

The  Prophet uploaded the picture of the beautiful baby with the caption: “Welcome to my Home Baby 5G. You shall bring Favour to all the #lionsfamily worldwide.”