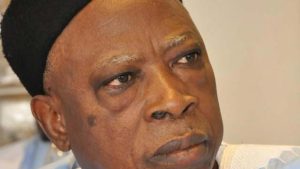 Abaribe who called on the President and the All Progressives Congress to resign had reminded the party that they asked to be stoned if they fail to perform.

Naija News had earlier reported that the Senator representing Abia South senatorial district stated this while contributing to the motion moved on the insecurity situation in Nigeria.

Abaribe had claimed that the President Buhari-led administration lied to Nigeria on defeating Boko Haram.

Abdullahi while reacting to Abaribe’s statement said the Senate Minority Leader should be called to order.

Abdullahi said: “I take exception to the contribution by the minority leader. Abaribe should be called to order. His call for the use of stone means calling for a weapon against the ruling party”.